This section provides information and downloads for discontinued products. These products are no longer available for new installations.

Spare parts may be available. Contact us for more information. 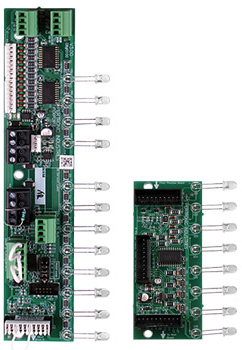 The RS485 LED Display Units (F100PDB & F100PDB12) are repeater / mimic displays that connect to the RS-485 Mimic Bus of Pertronic F220, and F100A fire panels. These displays may also be connected to the Pertronic Network Card (NETCARD) RS-485 Mimic Bus.

The LED display boards may be installed within a fire panel for local indication, or may be mounted in a selection of separate customised cabinets for remote indication of the panel status.