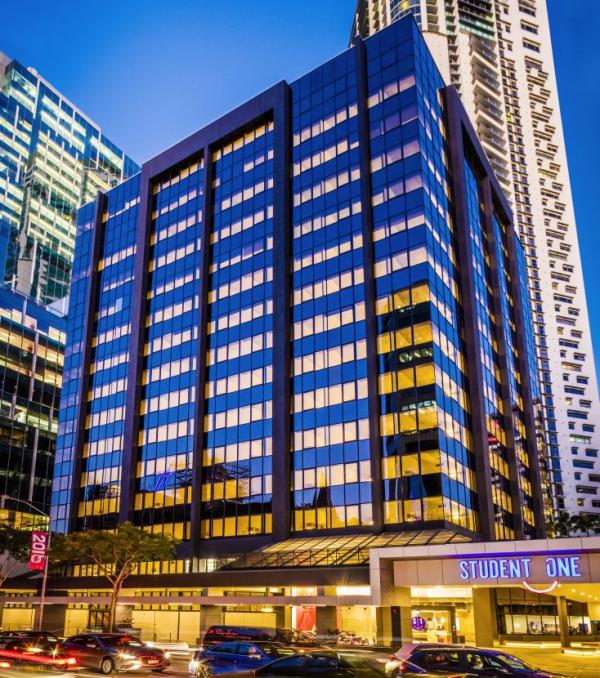 Student One provides premium student accommodation in Brisbane. Their first project involved the conversion of a 15-storey office building at 363 Adelaide Street in Brisbane’s CBD. The refurbished building accommodates 687 students in a mix of one-bedroom, two-bedroom, and five-bedroom apartments. Shared facilities include a theatre, lounge, games room, gym, outdoor barbeque, kitchen and laundry. In addition, there are five street-level shops and a two-level basement car-park.

The new Pertronic fire detection and alarm system has been integrated with other building systems, with the aim of minimising unwanted alarms without compromising occupant protection. In each apartment kitchenette, for example, the cooktop and the power outlet for the kettle and toaster will not work unless the building’s central exhaust system is operating. An intelligent multi-criteria sensor near the kitchenette reports independent heat and smoke information to the fire alarm control panel. If this sensor detects a high temperature, the control panel triggers a general fire alarm and calls the fire brigade.

If the multi-criteria sensor detects smoke, the control panel activates the kitchenette extractor fan and the building’s central exhaust system. The control panel also activates the kitchenette’s local alarm sounder. Occupants are trained to eliminate minor smoke sources such as burning toast. If the smoke is not cleared within three minutes the control panel initiates a general fire alarm and automatically calls the fire brigade. If the smoke does clear within that time, the exhaust system and extractor fans keep going for another five minutes. This nuisance alarm management system illustrates the use of an Alarm Delay Function (ADF).

The fire detection system works with an evacuation warning and information system to automatically evacuate the building, floor by floor, according to pre-prepared evacuation plans.

Contact Us to Find Out More About Pertronic Fire Systems