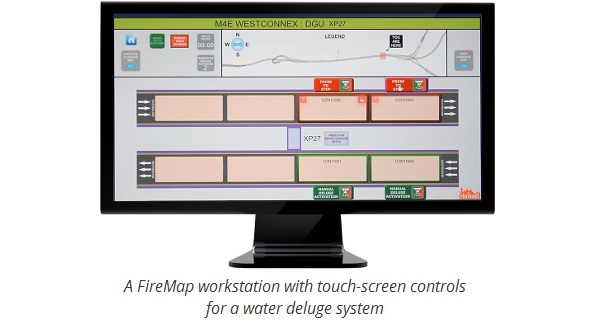 Controlling the deluge system in Sydney’s M4E motorway tunnels is the job of a Pertronic Net2 Network with 92 F220 Fire Indicator Panels. Most of the system has been installed in cross-passages between the twin roadway tunnels, where they are seldom seen by motorway operations staff.

If excessive heat is detected in a roadway tunnel zone, FireMap automatically displays a map of the affected area, with the zone containing the alarm signal highlighted in red. The FireMap water deluge zone display shows the time remaining until automatic deluge activation, together with touch-screen controls allowing tunnel operators to manually release or inhibit the deluge system. Used in concert with the tunnel’s closed-circuit video system, FireMap allows tunnel operators to respond appropriately to any alarm incident.

The Pertronic F220/Net2 v5.0 release has many new features of interest to Australian fire system professionals.

Contact us for more information about F220/Net2 Network System