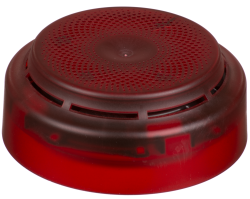 The LASS series Addressable Synchronised Wall Mount Strobe (LASS-WST-NC) is loop-powered visual alarm device that plug in to System Sensor analogue addressable detector base such as the B501.

Each LASS-series alarm device can be individually activated (addressed) by a fire alarm control panel over an analogue addressable loop. In a Pertronic F220 or F120A system, the control panel’s loop driver board controls the audible and visual signals. Tones and light flashes from all LASS alarm devices connected to a single loop driver can be synchronised, provided that the loop driver is fitted with firmware version 4.08.00 or later. An F220 loop driver can control two analogue addressable loops. So, all LASS devices on a pair of loops can be synchronised.

Two audible alarm tones can be controlled by the fire alarm panel. These tones indicate alarm Stage 1 (Evacuate) and alarm Stage 2 (Alert). The pair of tones may be configured from any one of four optional two-stage tone-sets. The sounder-strobe’s visual alarm is internally synchronised with the audible alarm.

The Addressable Synchronised Wall Mount Strobe (LASS-WST-NC) is independently certified as compliant with AS ISO 7240.3:2014.