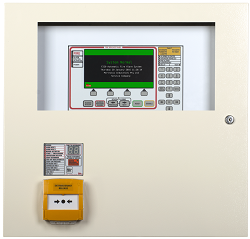 The system is based on the Pertronic F220 analogue addressable fire alarm control panel, together with the Pertronic Extinguishing Agent Release Controller (ARC). A single F220 panel may be fitted with multiple ARCs. Each ARC provides control, fault supervision, and monitoring for one fire suppression system.

The Auto Release Disabled button on any ACS or LCS may be used to prevent extinguishing release at any time, including after the automatic discharge process has been initiated. Each control station also has a lift-flap break-glass manual call point (MCP), allowing the agent release process to be triggered manually.

F220 Extinguishing Agent Release Panels are available in a range of cabinet sizes and styles, including weatherproof.