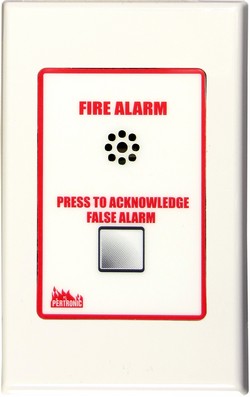 The Pertronic Alarm Acknowledge Module (AAM) provides a delay of fire alarm activation in the event of a nuisance alarm in a sole occupancy unit. This provides an opportunity for the occupant to clear the cause of the alarm. The AAM is designed to reduce the number of nuisance fire brigade calls.
Each AAM module should be configured to only control detectors within the sole occupancy unit it serves.
The AAM in-built piezo buzzer will begin to sound if a detector alarm within the sole occupancy unit is triggered. The alarm will also initiate an “Acknowledge” time delay period in the F220.
Pressing the AAM button during the “Acknowledge” period enables an “Investigate” time period. The fire brigade is automatically called if the button is not pressed during the “Acknowledge” period.
To prevent fire alarm activation, the cause of the alarm must be cleared during the “Investigate” period. If the alarm condition is not cleared, the fire brigade will be called.
Only one button press is acknowledged per alarm cycle. The buzzer may easily be tested by pressing the button until the buzzer sounds.
The AAM is supported by the F220 fire panel. The module connects to and is powered from the analogue loop using a single module address. No additional power supply is required.
The AAM complies with the Alarm Acknowledge Facility requirements in AS 1670.1:2015, and AS 7240.2:2004.
Pertronic detectors have in-built LED indicators which satisfy the visual indicator requirements of alarm acknowledge facilities in AS 7240.2:2004.