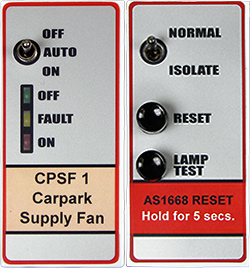 The Pertronic AA Fan Control System is used with Pertronic analogue addressable fire alarm control panels including the F220, to monitor and control fans associated with AS1668-compliant smoke control or air handling systems. The system controls AS 1668 fans through a building services interface, automatically controlling fans and other air handling devices based on the status of detectors, fan control units and mechanical building services.

A single Fan Control has two main components: The control unit; and the Pertronic Analogue Addressable Fan Control Relay. A fire alarm system based on a Pertronic analogue addressable panel may include many individual fan controls, each of which has at least one control unit and one fan control relay. The fan control relay is usually located near a mechanical services switchboard associated with the fan. Control units are normally mounted on the fire alarm panel.