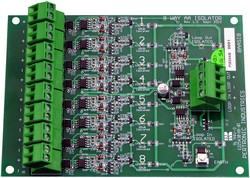 The board has individual spur isolators. A short-circuit on any spur will not affect the operation of any other spur, or the loop to which they are connected.

In addition, this board has input and output isolators. These ensure that if the 8SAAIB is installed remote from the control panel, a short-circuit on one side of the loop will not affect the operation of connected spurs or the other side of the loop circuit.