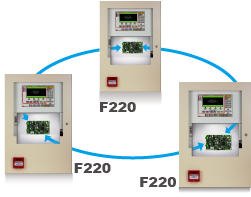 On a Pertronic Net2 Network:

A Pertronic Net2 Network may include up to 133 Net2 Network Cards (“nodes”). Each network card may be configured to interface one of the following devices to the Net2 Network:

A network may have multiple Modbus and/or FireMap interfaces.

In addition, a network card may connect with up to eight Net2 NCUs or Net2 remote displays. Each Net NCU may provide full control and monitoring of any or all networked fire panels. (Please refer to the datasheet for details.)