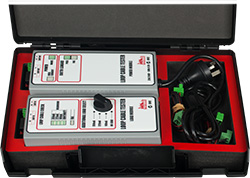 The Pertronic Loop Cable Tester is a tool for testing loop wiring in analogue addressable fire alarm systems. It is designed for validating new loop cabling prior to connecting to a fire alarm panel, and for testing and fault-finding loops on existing systems.

The test set comprises two compact modules: the Power Module and the Load Module. It is supplied in a carry case.

The Loop Cable Tester has been developed because standard instruments such as multimeters cannot be used for testing continuity or earth leakage on an analogue addressable loop. Some unpowered addressable devices break the loop into a series of isolated sections. The test set overcomes this difficulty by powering up the loop devices. With all devices powered up and drawing quiescent current only, the loop should behave similar to a pair of wires.

The Power Module checks earth isolation, provided it is connected to the same mains earth as the fire alarm panel.