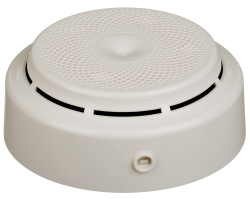 Each LASS-series alarm device can be individually activated (addressed) by a fire panel over an analogue addressable loop. In a Pertronic F220 system, the control panel’s loop driver board controls the audible signals.

Two audible alarm tones can be controlled by the fire panel. These tones indicate alarm Stage 1 (Evacuate) and alarm Stage 2 (Alert). The pair of tones may be configured from any one of four optional two-stage tone-sets. The sounder’s alarm is internally synchronised with the audible alarm.