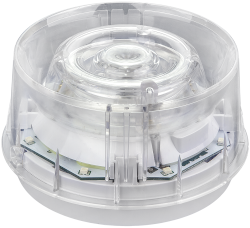 The WSS-PC-I00 AA Sounder + Strobe is a loop-powered audible and visual alarm device that plugs in to System Sensor analogue addressable detector bases such as the B501AP.

Each WSS-PC-I00 can be individually activated (addressed) by a fire panel over an analogue addressable loop.

Note: WSS-PC-I00 sounder + strobes are not compatible with the B501AUS detector base. They need the deeper B501AP type.