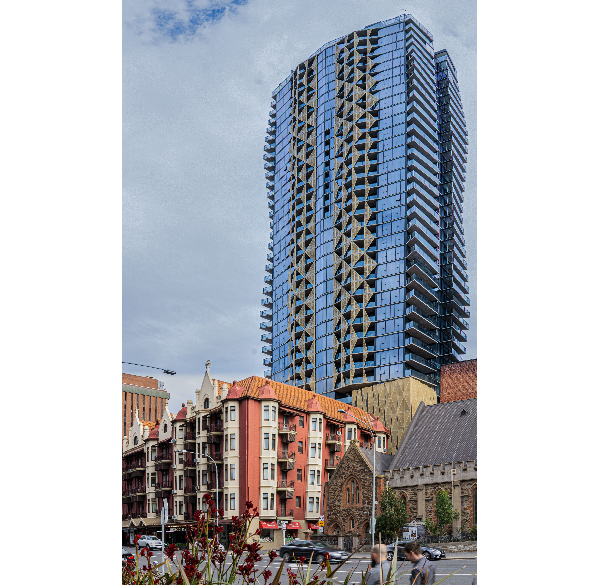 Completed in mid 2020, the 40-storey Realm Tower is Adelaide’s tallest residential building. Realm has 310 apartments on levels 8 to 39, and a residents’ carpark on levels 1 to 7. A ground floor retail arcade connects with existing arcades leading to the open-air Rundle Mall, a busy retail and entertainment precinct in Adelaide’s CBD.

The fire detection and alarm system in Realm Adelaide is based on a Pertronic F220 analogue addressable fire panel. The fire panel monitors 469 analogue addressable photo-electric smoke detectors in the basement, stairways, pressurisation fan ducts, public, common and service areas. In addition, each apartment has one or more 230 Vac smoke alarms. Manual call points in strategic locations allow residents to trigger an alarm condition in the F220.

The building’s sprinkler system covers all interior spaces (including apartments) and is monitored by more than 150 analogue addressable sensors on the F220’s analogue addressable circuits. The F220 identifies the source of any sprinkler or fire hydrant valve activation based on information from these sensors. The F220 also monitors and controls the building’s diesel fire pumps.

In the event of a fire alarm, the F220 automatically calls the fire brigade and initiates a set of automatic functions to facilitate safe evacuation. The F220 signals the security system to unlock secure doors and open the loading bay, car park, and main entry doors. The F220 also signals the mechanical services boards to de-activate non-essential mechanical services. A switch on the F220 allows fire brigade to manually shut off the building’s gas supply if required during an emergency. 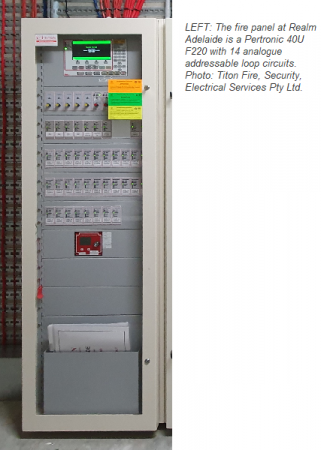 To maintain satisfactory air quality in the stairways, the Pertronic F220 controls a system of pressurisation fans and relief air dampers, with a BACNet interface controlling the speed of the pressurisation relief fan. The F220 also controls the carpark jet fans.

Fire shutters at the east and west ends of the ground-floor arcade are intended to prevent smoke spreading to adjacent arcades. In response to an alarm signal from the ground floor or level one, the F220 triggers warning sounders and strobes near the fire shutters. Ten seconds later, the F220 lowers the fire shutters.

The F220 will also open the arcade’s exterior doors and ventilation louvres in the event of a fire alarm from anywhere within the building. 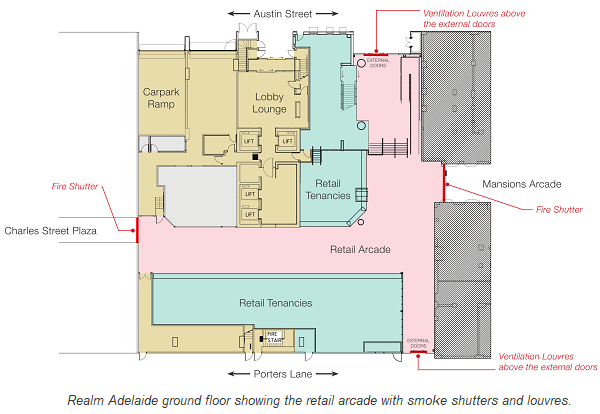 An emergency warning system triggered by the F220 advises occupants to evacuate according to pre-determined evacuation plans.

Warden Intercom Phones are installed in the lift lobby of every level adjacent the fire exits and also in each of the emergency services lifts.

A Pertronic FireMap® graphic system in the building manager’s office automatically displays a diagram showing the location of the source of any fire alarm, with active detector(s) highlighted on a floorplan in red.

The fire detection and alarm system at Realm Adelaide was installed by Titon Fire, Security, Electrical Services Pty Ltd. Pertronic Industries congratulate Titon and everyone involved in the successful completion of this interesting project.