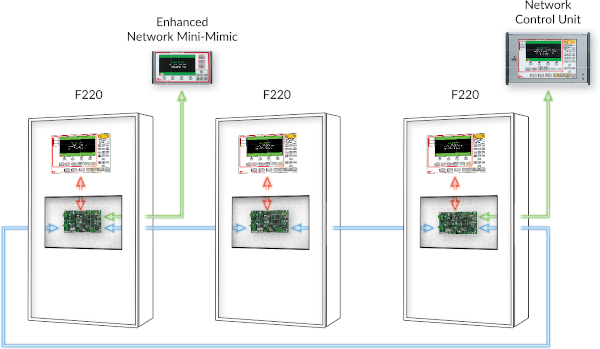 Australian Standard AS 7240.13:2021 requires an alarm activation on one fire panel to appear on all the other networked fire panels within 20 seconds. However, a single alarm signal does not represent real world conditions. A fire alarm system will record dozens of events during a fire alarm incident.

Some recent tests capture the F220-Net2 network’s capabilities. We built a network with 156 F220 fire panels and seven additional network nodes. We disconnected the network cable between fire panels ten and eleven, to simulate a network fault. This also forced signals from panel 11 to pass through every network node before reaching panel 10.

The Pertronic F220-Net2 network’s communication management system has been proven in a variety of situations. Commercial developments such as 180 & 192 Ann Street have networked fire panels with thousands of devices per panel. Motorway tunnels have large numbers of fire panels, with each panel monitoring a few tens of devices. Feedback from installers and users confirms the excellent performance of F220-Net2 networks in all configurations.

Consider specifying Pertronic equipment for your next big fire alarm system. You and your customers will be very happy with the result.